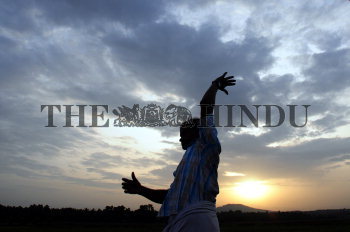 Caption : THIRUVANANTHAPURAM 13/07/2008---An early morning sun lighting up the sparse monsoon clouds above Thiruvananthapuram during what is normally the wettest month of July says it all - the week ending July 9 saw Kerala pile up an unprecedented 95 per cent deficit. This came after the month of June had left a shortfall of around 40 per cent. Forecasters are now looking out for early signs of a revival of rains in the `Monsoon Gateway State' from later into the week..............Photo:S_Gopakumar