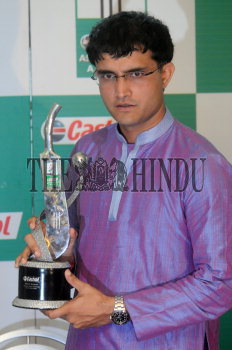 Caption : KOLKATA, 10/07/2008: India's Sourav Ganguly showing the trophy of the Castrol Asian Cricketer of the Year 2007 award during a function at his residence in Kolkata on July 10, 2008. He was selected as the best allround performer in Asian cricket in the year 2007. Photo: Arunangsu Roy Chowdhury