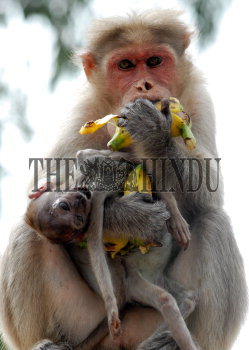 Caption : MYSORE, 04/07/2008: MOURNING MONKEY: Though three days had passed since the baby monkey died atop Chamundi Hills, its mother refuses to let it go. Locals claim that the mother of the monkey carries its dead little one around wherever it goes and swats flies that try to buzz around the dead body. Photo: M.A. Sriram