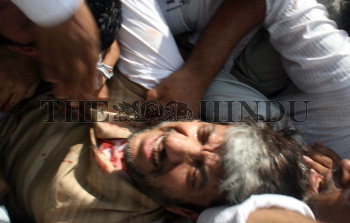 Caption : PHALGAM, 04/07/2008: Police beating SHABIR AHMAD SHAH in Hazratbal Shrine, Srinagar during a protest in Srinagar on July 4, 2008. Protests were held on Friday after two separatist leaders were put on house arrest before they could speak at a rally in Hazratbal, Kashmir's holiest shrine. Photo: Nissar AHMAD