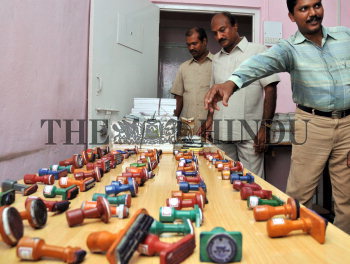 Caption : HYDERABAD, 04/07/2008: Scores of FAKE stamps recovered from a self-styled 'Golkonda University of Hyderabad' by the East Zone Task Force Team after a raid at the premises near Exhibition Grounds in the City on July 04, 2008. Photo: P.V. Sivakumar