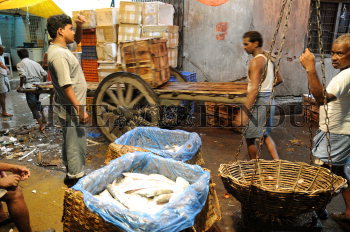 Caption : Kolkata: HOWRAH Fish Market, one among the major wholesale fish market in the country witnessed a low inflow of fish on Thursday as the truckers across the country stopped ferrying goods from yesterday, as part of an indefinite strike to push for abolishment of toll tax and rationalisation of duty on diesel. According to the secretary of the HOWRAH Fish Importers Association, Kolkata markets are mostly depended on the fishes imported from Andhra Pradesh for ÎRohuâ and ÎKatlaâ varieties and Bangladesh for ÎHilsaâ. The Kolkata fish markets receive nearly 70-truck load of fishes in various points, which has been reduced to its half today. The strike that started in the early hours of Wednesday was called by the All India Motor Transport Congress (AIMTC), which claims the support of all state transporters' association with a combined fleet size of 48,00,000 trucks. Photo: Arunangsu Roy Chowdhury July 03, 2008.