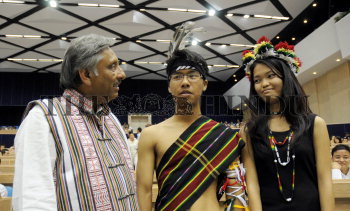 Caption : NEW DELHI, 02/07/2008: Minister of Development of North Eastern Region (DONER) and Panchayati Raj, Mani Shanker Aiyar, interacting with some of the invitees during a function where the Prime Minister released the 'North Eastern Region Vision 2020' Document in New Delhi on July 02, 2008. Photo: S. Subramanium