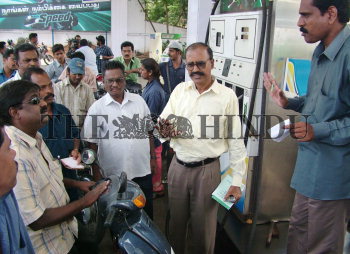 Caption : COIMBATORE, 30/06/2008: The District Flying Squad Thasildar V.Subramaniam (second right) listening to an arguement between a motorist and the PETROL pump incharge over the non-supply of the ordinary fuel at the outlet during a raid in the city on June 30, 2008. Photo: M. Periasamy