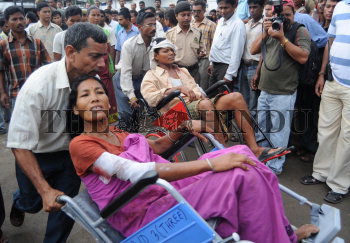 Caption : GUWAHATI, 29/06/2008: BOMB BLAST IN KUMARIKATA IN ASSAM - Injured of the bomb blast being brought to Gauhati Medical College (GMC) Hospital on June 29, 2008. At least eight persons, including three women, were killed on the spot and more than 40 others injured in a powerful bomb blast at a Kumarikata weekly market in Baksa district of Lower Assam about 95km away from Guwahati city on June 29, 2008. The bomb went off around 1.10 pm in the area where pigs were being sold and the market was crowded with buyers. Another bomb was also recovered from the market place. The injured were admitted to local hospitals while the critically injured were referred to the Gauhati Medical College Hospital. Police suspected United Liberation Front of Asom (ULFA) militants to be behind the blast. ULFAâs ÎAâ and ÎCâ companies 28th battalion announced an unilateral truce on June 24, 2008, while the ÎBâ company of the battalion opposed it. Senior leaders of the ULAF accused that the C-in-C of the ULFA Paresh Baruah and few other cadres for not showing interest in the peace talk with the Government. Photo: Ritu Raj Konwar