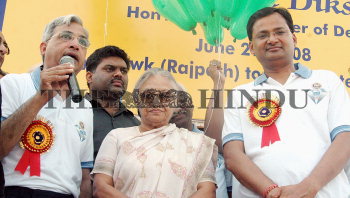 Caption : NEW DELHI, 29/06/2008: Chief Minister Sheila Dikshit flanked by president of the Institute of Chartered Accountants of India Ved Jain (left) and vice-president of the institute Uttam Prakash Agarwal during a marathon for chartered accountants at Rajpath in New Delhi on June 29, 2008 to celebrate the 60th anniversary of ICAI. Photo: Ramesh Sharma