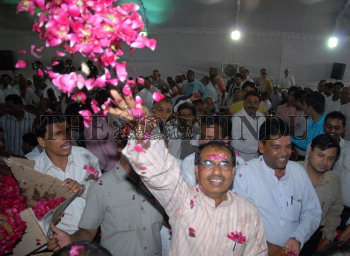 Caption : BHOPAL, 25/06/2008: Madhya Pradesh Chief Minister Shivraj Singh Chauhan showering petals on former MISA detainees, during a felicitation programme at his residence in Bhopal on June 25, 2008, the anniversary of the infamous Emergency imposed in 1975. Photo: A M Faruqui