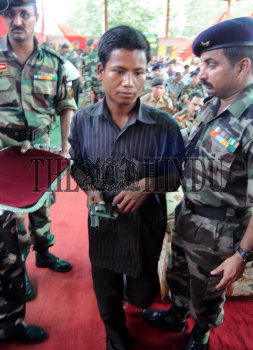 Caption : GUWAHATI„24-06-2008 : (ULFA MILITANTS SURRENDERED IN ASSAM) A United Liberation Front of Asom (ULFA) militant on his way to lay down his arm during a surrender ceremony organised by the Indian Army in Tamulpur Army camp 75 km away from Guwahati city on Tuesday, June 24, 2008. All total 26 ULFA militants surrendered in this occasion. All total of 18 pistols with ammunitions, 4 Chinese hand grenades, 4 Indian hand grenades and large quantity of explosives have been handed over by the militants. PHOTO: RITU_RAJ_KONWAR