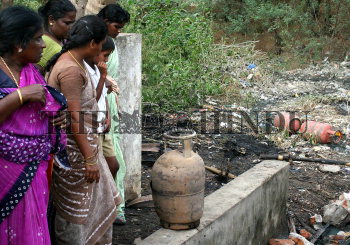 Caption : KANCHEEPURAM 24 JUNE 2008 FOR TN BUREAU/CITY CAPTION: More than a dozen cylinders, both meant for use in domestic and commercial purposes exploded in a house in Guduvanchery on Tuesday. The house belonged to an person working in a LPG cylinder distribution agency. Photo : A_Muralitharan. Story by Mr. VVS, Kancheepuram.