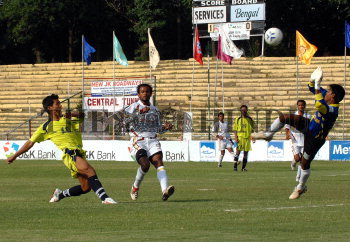 Caption : SRINAGAR, 12/06/2008: Services forward S. Raleng (left) makes an attempt as Bengal defender Debobrato Roy (5) and goalkeeper Abhra Mondal rush to save during the semifinal of the 62nd National football championship for the Santosh Trophy at the Bakshi Stadium in Srinagar on June 12, 2008. Photo: Shanker Chakravarty