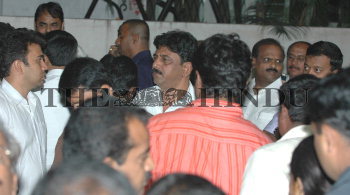 Caption : Former Minister D.K. Shivakumar's supporters surrounding his house in Bangalore on November 15, 2006. The former minister has stated that the PKP company yard did not belong to his family Photo: G.P. Sampath Kumar