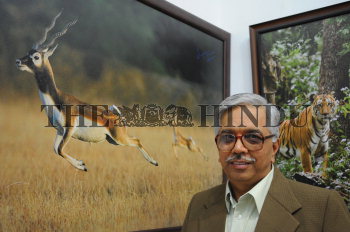 Caption : BANGALORE - 14/06/2008: M N Jayakumar, Chief Conservator of Forests, Karnataka, along with his photographs displayed, during the media preview of 'Encounters in the Wild" - An exhibition of Exclusive Indian Wildlife Photographs, at Chitrakala Parishad Art Complex, in Bangalore on June 14, 2008. The exhibition starts from June 19th until June 25th, 2008. Photo: K_Murali Kumar.