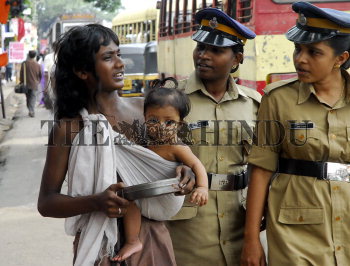 Caption : THIRUVANANTHAPURAM 12/06/2008: Gaurdian angels of the law swoop on 'child beggers' in Thiruvananthapuram (where begging is banned) and are curiously surprised on learning that the boy and his little sister--'Master Mishal and Baby Mishal'--are only holding a demonstration to create public awareness against child labour on June 12, 2008 - the World Day Against Child Labour..........Photo:S_Mahinsha