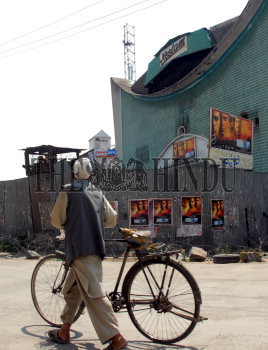 Caption : SRINAGAR, 11/06/2008: A kashmiri old man walks past the posters of Pakistani movie 'Khuda Kay Liye' (In the Name of God) outside NEELAM Cinema, kashmir's only cinema theatre in Srinagar on June11, 2008. The first Pakistani movie to get an official screening in Kashmir in over four decades has DRawn only a handful of viewers. The film is about the rift between radical and liberal views of Islam. Photo: Nissar Ahmad