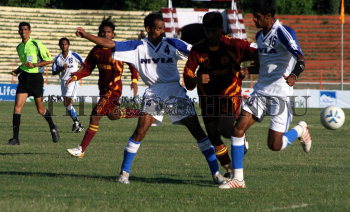 Caption : SRINAGAR, 10/06/2008: Players are in action during the quarterfinal football match between Maharashtra and West Bengal at the 62nd edition of the Santosh Trophy 2008 in Srinagar June 10, 2008. Santosh Trophy, a prestigious Indian football championship that kicked off on May 25 in Srinagar, the capital of Kashmir, after a hiatus of 30 years. Photo: Nissar Ahmad