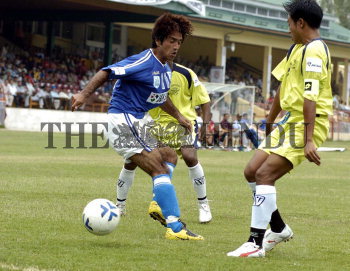 Caption : SRINAGAR, 09/06/2008: Ishfaq of Jammu and Kashmir steers the ball away from Services players during the quarterfinal football match at the 62nd edition of the Santosh Trophy 2008 in Srinagar June 09, 2008. Santosh Trophy, a prestigious Indian football championship that kicked off on May 25 in Srinagar, the capital of Kashmir, after a hiatus of 30 years. Photo: Nissar Ahmad