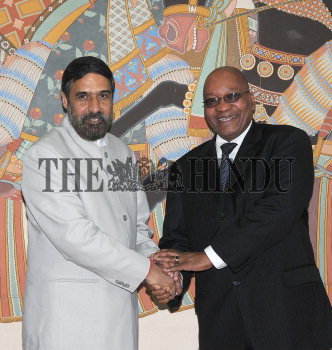 Caption : NEW DELHI, June 8, 2008 : President of ruling African National Congress and former Vice President of South Africa, Jacaob G ZUMA being welcomed by MoS for External Affairs Anand Sharma on his arrival in New Delhi on Sunday, June 8, 2008 . ZUMA has lined up talks with a host of top officials including Sonia Gandhi, Congress president and then will travel to Beijing where he has scheduled talks with Chinese President Hu Jintao. Photo By: Rajeev Bhatt