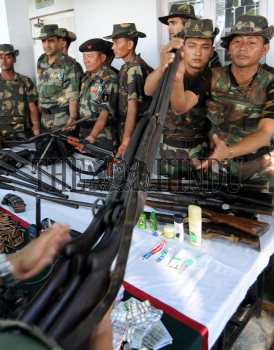 Caption : DINJAN 08-06-2008: (ARMS RECOVERED FROM ULFA MILITANTS IN UPPER ASSAM) Arms and ammunitions recovered from the ULFAās 28 Battalion put in display at Dinjan in Upper Assam on June 08, 2008. Troops of Dah Division of the Indian Army recovered a large consignment of weapons from the Teji Gaon village of Upper Assam which were coming from Myanmar via Arunachal Pradesh. One AK rifle along with 200 live rounds, 20 twelve bore single barrel gun with 300 live rounds, one satellite phone, two Kenwood walki talki sets, one grenade and 70 copies of extortion notes have been recovered from the ULFA militants in this operation. One senior ULFA cadre Pipla Moran was also killed in this operation. PHOTO: RITU_RAJ_KONWAR