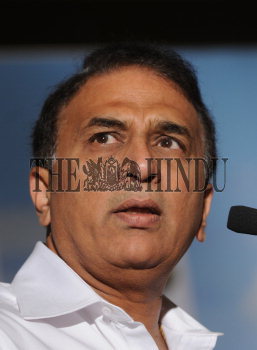 Caption : BANGALORE - 03/06/2008: Sunil Gavaskar, member of the Indian cricket team that won the 1983 World Cup, during an event organized as part of the 25th anniversary celebrations in Bangalore, India, Tuesday, June 3, 3008. India won the cricket World Cup in 1983 in the final match against West Indies at Lords in England. The bat signed by members of the winning team will be encrusted by diamonds and auctioned. Photo: K_Murali Kumar.