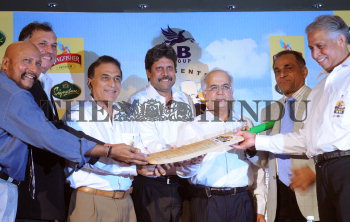 Caption : BANGALORE, 03/06/2008: Syed Kirmani, Roger Binny, Sunil Gavaskar and Kapil Dev, members of the Indian cricket team that won the 1983 World Cup, hold on to the autographed bat with an UB Group official and BCCI Secretary Niranjan Shah at a function organised as part of the 25th anniversary celebrations of India's 1983 World Cup victory in Bangalore on June 03, 2008. The bat signed by the members of the team will be encrusted with diamonds and will be auctioned. Photo: K. Murali Kumar