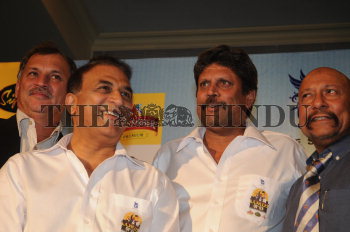 Caption : BANGALORE, 03/06/2008: Roger Binny, Sunil Gavaskar, Kapil Dev and Syed Kirmani, members of the Indian cricket team that won the 1983 World Cup, at a function organised as part of the 25th anniversary celebrations of India's 1983 World Cup victory in Bangalore on June 03, 2008. A bat signed by the members of the team, encrusted with diamonds, will be auctioned and the proceeds will be given to the team. Photo: K. Murali Kumar