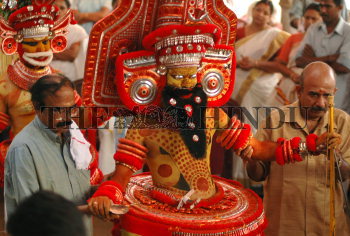 Caption : KOCHI: Thiruvappana and Vellattam, one of the Theyyam rituals, performed at Changampuzha Park last week. Theyyam captures the spirit of traditional rituals from northern parts of the State. 16 traditional artistes from Kannur performed in Kochi. Photo: H. Vibhu 13-11-2006