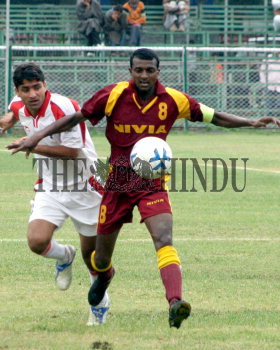 Caption : SRINAGAR, 02/06/2008: Players are in action during a match between Haryana and Karnataka during the 62nd National Football Championship for the Santosh Trophy 2008 in Srinagar on June 02, 2008. Photo: Nissar Ahmad