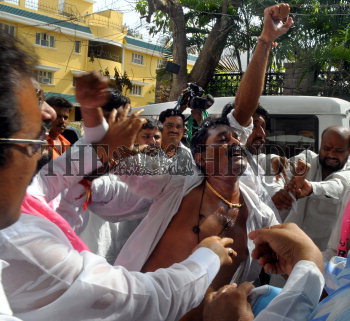 Caption : HYDERABAD, 01/06/2008: Telangana Rashtra Samithi activists try to snatch a kerosene bottle from another activist who attempted to self- immolation by pouring in front of the party president K Chandrasekhar Rao's residence in Hyderabad on June 01, 2008 after KCR offered to quit the party president post owning moral responsibility for his party's poor performance in the by-elections. Photo: Mohammed Yousuf