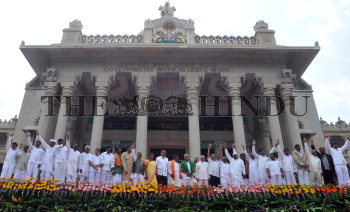 Caption : BANGALORE, 30/05/2008: B.S. Yeddyurappa, the new Chief Minister of Karnataka along with Ministers posing for a group photograph, after the swearing in ceremony in front of Vidhana Soudha, in Bangalore. Photo: K. Bhagya Prakash