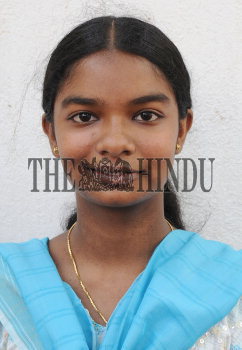 Caption : TIRUCHI, 30/05/2008: S.Shivani, a student of St. Joseph's Anglo-Indian Girls Higher Secondary School comes second in the state and first in Tiruchi district in the X Anglo-Indian examination with a total of 485, the results of which were declared on May 30, 2008. Photo: M. Moorthy