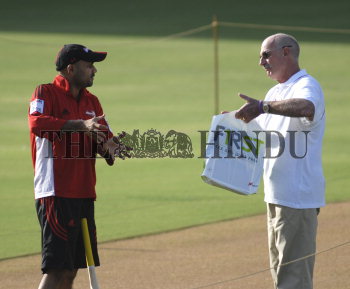 Caption : MUMBAI, 29/05/2008: Former Australian bowler Dennis Lillee (right) with Delhi Daredevils captain Virender Sehwag during a practice session on the eve of the first semifinal of the DLF Indian Premier League Twenty20 cricket tournament between Delhi Daredevils and Rajasthan Royals at the Wankhede Stadium in Mumbai on May 29, 2008, Photo: Vivek Bendre