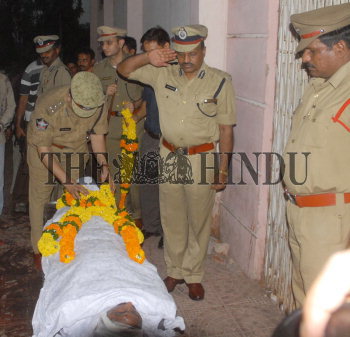 Caption : ViISAKHAPATNAM, 29/05/2008: Inspector General of Police (coastal districts) Satyanarayan pays respects to the body of Greyhounds Head Constable Anil Kumar in the KGH mortuary, Visakhapatnam on May 29, 2008. Anil Kumar was killed in a landmine blast followed by exchange of fire with Maoists in G.K. Veedhi mandal on May 28, 2008. Photo: C.V. Subrahmanyam