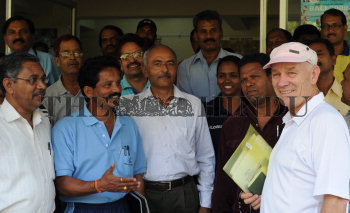 Caption : BANGALORE, 29/05/2008: Ric Charlesworth, Technical Advisor, Indian hockey, who will be conducting a five-day hockey workshop for coaches from different parts of the country at the SAI South Centre in Kengeri, Bangalore, seen with coaches during the inauguration on May 29, 2008. Photo: K. Murali Kumar