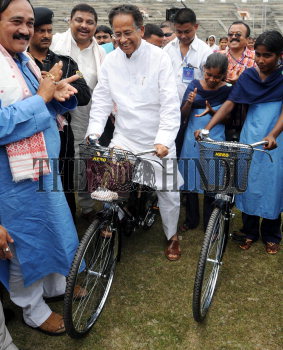 Caption : GUWAHATI, 28/05/2008: (ONE LAKH BICYCLE DISTRIBUTED IN ASSAM) - Assam Chief Minister Tarun Gogoi tests a bicycle before distributing it among the girl students during a mass bicycle distribution programme in Guwahati on May 28, 2008. More than one lakh bicycles have been distributed among the poor girl student of class eight and nine slandered through out the Assam State by the Tarun Gogoi lead Congress government. These bicycles are given to encourage girl education in the state. Photo: Ritu Raj Konwar