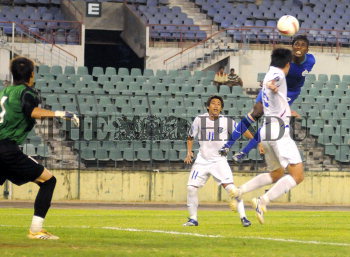 Caption : CHENNAI, 27/05/2008: N.P. Pradeep of India, who scored two goals, seen in action against Chinese Taipei during the International friendly football match at the Jawaharlal Nehru Stadium in Chennai on May 27, 2008. Photo: R. Ragu