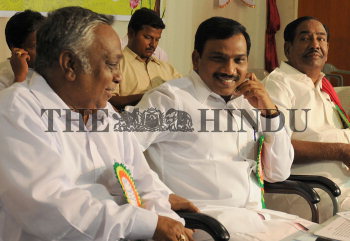 Caption : TIRUCHI, 27/05/2008: (From left to Right) K.Vallinayagam, General Secretary, National Union of BSNL Workers, New Delhi, A.Raja, Union Minister for Communications and IT and L.Ganesan,Tiruchi MP at the National Union of BSNL workers second State Conference at Tiruchi on May 27, 2008. Photo: M. Moorthy