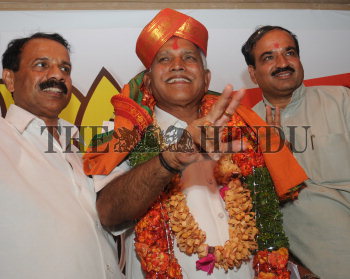 Caption : BANGALORE - 25/05/2008: BJP chief minister candidate B S Yeddyurappa along with (L-R) Sadananda Gowda, Ananthkumar, after being felicetated at the BJP Party office, after the all the results were declared, in Bangalore on May 25, 2008. Photo: K_Murali Kumar.