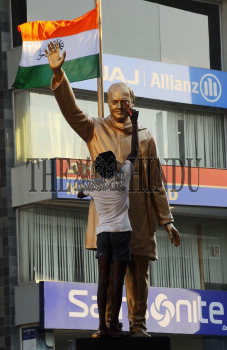 RAJIV GANDHI AHEAD OF HIS DEATH ANNIVERSARY

Caption : HYDERABAD-20/05/2008: A painter reaching out to give final touches to the statue of former Indian Prime Minister Rajiv Gandhi ahead of his death anniversary at Hyderabad on Tuesday. Gandhi was killed by a Tamil Tiger suicide bomber while campaigning for his Congress party in Sriperumbudur on May 21,1991. -Photo: Mohammed_Yousuf