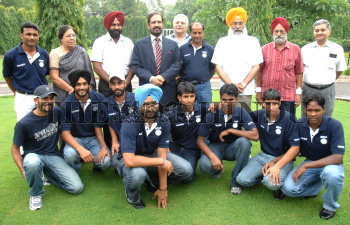 Caption : New Delhi, May 20, 2008 ---- Some of the Indian hockey team members with Inidan Olympic Association President Suresh Kalmadi and officials at Kalmadi's residence, after winning the silver medal in Sultan Azlan Shah hockey tournament in Malaysia, in New Delhi on May 20, 2008. Photo: Shanker Chakravarty