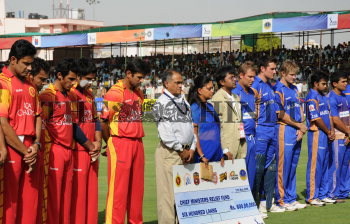 Caption : NEW DELHI, 17/05/2008: Prayers: Rajasthan Chief Minister Vasundhara Raje, Indian Premier League commissioner Lalit Modi, BCCI secretary Niranjan Shah along with the team members of Royal Challengers and Rajasthan Royals observing silence in memory of victims of the serial blasts, before the start of the IPL Twenty20 cricket match in Jaipur on May 17, 2008. Modi presented a cheque for Rs. 6 crore towards the Chief Minister's Relief Fund to Ms. Raje on behalf of the IPL. Photo: Rajeev Bhatt