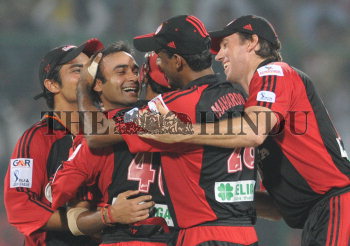 Caption : New Delhi May 15, 2008: IPL Delhi v/s Hyderabad : Delhi Daredevils bowler and Man of the Match Amit Mishra who claimed 5 wickets along with a Hat-trick against Deccan Chargers being congratulated by Glenn McGrath, Maharoof, Shoib Mallik and other teammates during the DLF-IPL Twenty20 cricket match at the Ferozeshah Kotla ground in New Delhi on May 15, 2008. Photo by: Rajeev Bhatt