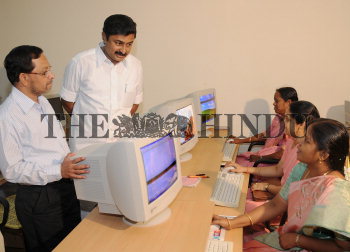 Caption : M.P. Saminathan, Highways Minister (second from left) and K. Allaudin, secretary, Department of Highways enquiring the employees of the Highways deparment during their inauguration of computer training on Thursday. Photo:S_R_RAGHUNATHAN