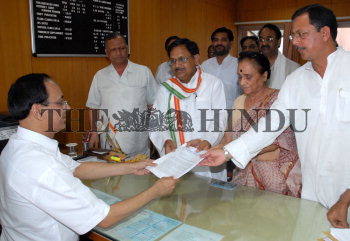 Caption : BHOPAL, 12/05/2008: Madhya Pradesh Congress Committee President Suresh Pachauri along with Leader of Opposition Jamuna Devi, party's campaign in-charge Ajay Singh and other senior Congress leaders giving a memorandum to Chief Election Officer J.S. Mathur in Bhopal on May 12, 2008 against the multiple irregularities in 'Voters list' including deletion of names, inclusion of illegal names, wrong addresses and take action against those officials involved in this exercise. Photo: A.M. Faruqui