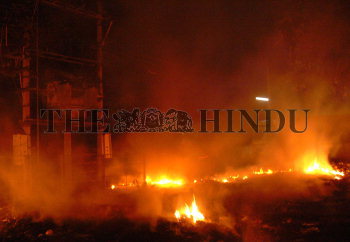 Caption : VELLORE, 12/05/2008: Garbage Fire: Fire from the garbage strewn around the transformer in Veerasamy Street near Lakshmi Theatre in Vellore on May 12, 2008 poses great danger. The burning garbage is a common scene during night times everyday. Rubbish thrown in daily during morning hours is being burnt knowingly or unknowingly which not only causes environment pollution but poses danger to the transformer nearby. Some say the fire is caused due to the cigar buds thrown in the rubbish. Photo: D. Gopalakrishnan