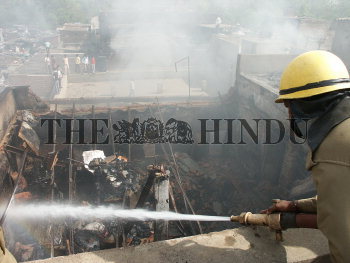 Caption : NEW DELHI, 11/05/2008: Fire service personnel trying to douse a fire at a footwear factory at Wazipur Industrial area in New Delhi on May 11, 2008. No one was injured. About two dozen fire tenders took over two hours to douse the flames. The factory was gutted in the fire. Photo: Sushil Kumar Verma