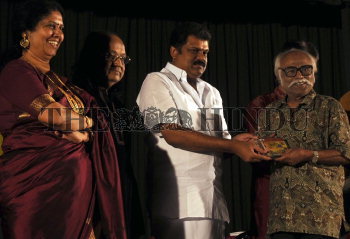 Caption : CHENNAI, 10/05/2008: G.K. Vasan, Union Minister for Statistics, releases the DVD on documentaries and TV serials, and it is being received by writer Jayakkannthan, at a function organised by Krishnaswamy Associates in Chennai on May 10, 2008. Also in the picture are (from left) Mohana Krishnaswamy and S. Krishnaswamy, Managing Director of Krishnaswamy Associates. Seven popular television serials and documentaries, produced by Krishnaswamy Associates, were released in DVD/ VCD formats by Minister of State for Statistics and Programme Implementation G.K.Vasan at the function. The titles released included 'Divine Fragrance', 'Indus Valley to Indira Gandhi', 'Unmai Sudum', 'Thuppariyum Sambu', 'Savitri','Oorarinda Rahasyam' and 'Ananda Thandavam'. Photo: S.S. Kumar