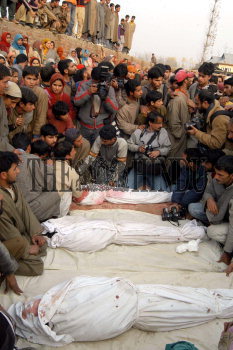 Caption : Villagers around the bodies of blast victims in Pulwama on November 10, 2006. Six civilians including four girls were killed and over 50 injured, when militants hurled a grenade outside the mosque during the Friday prayers at Tahab Pulwama, Srinagar. Panic gripped the village and people rushed the injured to hospitals. Photo: Nissar Ahmed