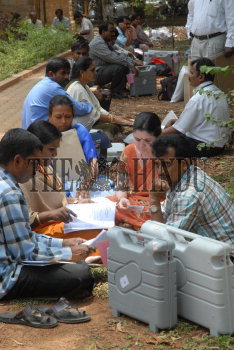 Caption : BANGALORE, 09/05/2008: Election officials after collecting the election materials, checking it before leaving for their destination at 18th Cross, Malleswaram Ground in Bangalore. Photo: K.Gopinathan 09-05-2008