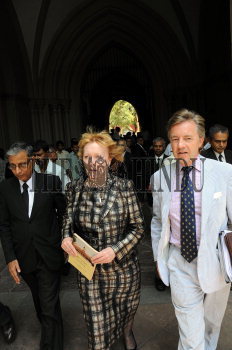 Caption : Kolkata: Ms. Bridget Prentice, Minister for Justice, United Kingdom and British Deputy High Commissioner, Kolkata Mr. Simon Wilson (Right) along with the advocates at High Court in Kolkata on Wednesday. Ms. Prentice met the members of the legal profession at High Court and the industrialists at Bengal Chamber of Commerce during her one day tour to the city. Photo: Arunangsu Roy Chowdhury May 07, 2008.