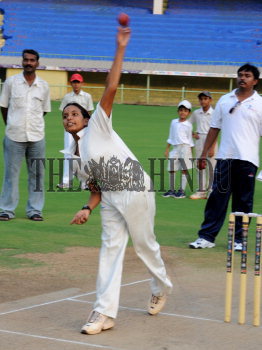 Caption : Visakhapatnam:02/05/2008: A girl shows her skill during the inaugural function of The Hindu-sponsored summer coaching camps of Visakhapatnam District Cricket Association at the ACA-VDCA stadium in Visakhapatnam on March 02, 2008. Nearly 600 boys and girls are attending the camps being held at six centres in the city and at Anakapalle and Bheemunipatnam.---Photo:K.R. Deepak